Recalling the Rethugs in Wisconsin 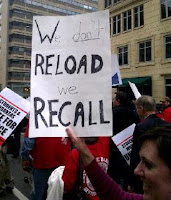 The recall movement in Wisconsin is showing real momentum. A petition to recall Rethug Sen. Dan "Krap" Kapanke of La Crosse had well over the 15,588 signatures necessary, and will be filed in Madison today. Obama won Krap's district in 2008 with 61% of the vote, so this should be an easy pick. Let's hope. The linked article also notes that the poll numbers for the Rethug Senator with the best name, Randy "Randy" Hopper, are heading tank-ward, now that his constituents are aware of his State job placement efforts on behalf of his mistress, who's half his age. Well played, Randy Randy!

On Wisconsin!
Posted by Hackwhackers at 10:27 AM