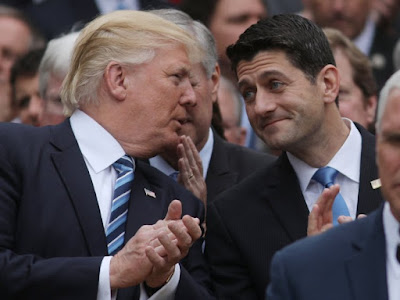 With the retirement of the Koch brothers' spineless, coin- operated Ayn Rand acolyte Squeaker of the House Paul "Lyin'" Ryan come next January, most thoughtful opinion is rightly focused on the shams ("fiscal conservative policy wonk") and the shame (the last 18 months in particular) that will define his cruel, threadbare "legacy."

Jonathan Cohn and Andrew Delaney discuss Ryan "[t]ethering his party to an extreme, deeply conservative agenda that the public rejects," as well as his unwarranted media image as a serious and principled policy wonk:


... Ryan turned out to be as committed to fiscal responsibility as his Republican predecessors were ― which is to say, he wasn’t very committed at all, as a handful of critics had long warned. (One of them was New York Times columnist Paul Krugman, who in 2010 called Ryan a “flimflam man.”) Although he didn’t like to advertise it, he too had voted for those deficit-busting proposals of the Bush era.

And once Ryan was in charge of writing GOP budgets, starting in 2011, he relied heavily on generous assumptions about economic growth and unspecified spending cuts that nobody seriously believed Congress would make.

E.J. Dionne, Jr., on the deal with the orange devil Ryan made in order to advance his Republican Social Darwinism:


...[H]is policies suggested he never abandoned his core faith: If the wealthy did best when given positive incentives in the form of more money, the less fortunate needed to be prodded by less generous social policies into taking responsibility for their own fate.

Given where Ryan’s passions lie, it is unsurprising that he would prop Trump up as long as the president was willing to embrace a modern-day social Darwinism that married efforts to repeal the Affordable Care Act with reductions in government’s impositions on the managers and owners of capital. The retiring speaker really does believe that this is the path to the good society. To pursue it, he’ll take help wherever he can get it.

Dana Milbank on Ryan as an unreconstructed Trump enabler:


... The free-market, limited-government conservatism he championed has been destroyed. And yet he still binds himself to the man who destroyed it all.

Fox News’s Mike Emanuel asked whether Ryan was “sending a signal that the House is lost for Republicans.”

Ryan, incredibly, answered by praising Trump. “I’m grateful for the president to give us this chance to actually get this stuff done,” he said.

Was his retirement influenced by the way Trump changed the party?

“Not at all,” Ryan maintained. “. . . I’m grateful to the president for giving us this opportunity to do big things to get this country on the right track.”


As does Nate Silver, who points out the media's shallow, lazy glorification of Ryan:

Paul Ryan's a bit like John Kelly in that the media started out with a caricature of him—in Ryan's case, as a wonkish, reasonable, deficit hawk and fiscal conservative—that was pretty impervious to contrary evidence.
— Nate Silver (@NateSilver538) April 11, 2018


Not to worry;  the media will still refer to him as a "policy wonk," rather than the partisan phony that he is.

For more choice reactions, check out the smart Paul's -- that would be Paul Krugman's -- twitter feed; he was on to Ryan long, long ago.

Finally, Jimmy Kimmel last night on where Ryan will be missed:

BONUS:  Anne Laurie at Balloon Juice has more on the "heavyweight fake."