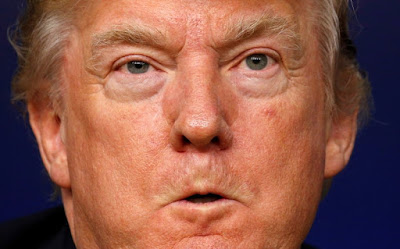 Yesterday's demand by obstructer-In-Chief and un-indicted co-conspirator Donald "Rump" Trump that the DOJ/FBI assist him in obstructing the Mueller counterintelligence investigation involving his campaign staff (Carter Page, George Papadopoulos, etc.) was the subject of a 3:00 p.m. meeting today at the White (Supremacist) House. No doubt the chief obstructor, fearing for his life legally and politically, will ask the attendees -- Deputy Attorney General Rod Rosenstein, FBI Director Christopher Wray, and Director of National Intelligence Dan Coats -- why they aren't loyally working with him to frustrate the investigation into his corrupt and probably treasonous ties to Russia (and who knows who else?). Rosenstein's announcement that the DOJ's Inspector General will review Rump's cynically bogus "demand" may not have appeased Rump, especially if he caught pornstache support system and sinister party-before-country hack Joseph "Degenerate" diGenova on a local Washington radio show this morning, railing against Rosenstein and DOJ.

We'll see if a statement is forthcoming from the meeting. One would hope that Rosenstein and Wray convinced Rump refrain from disclosing sensitive information about the sources and methods of the investigation. Knowing Rump and his disregard for law, national security, others' lives,  and anything that doesn't involve his own protection, that would be a lofty hope. Stay tuned.


"Based on the meeting with the President, the Department of Justice has asked the Inspector General to expand its current investigation to include any irregularities with the Federal Bureau of Investigation's or the Department of Justice's tactics concerning the Trump Campaign. It was also agreed that White House Chief of Staff Kelly will immediately set up a meeting with the FBI, DOJ, and DNI together with Congressional Leaders to review highly classified and other information they have requested." (emphasis added)

Posted by Hackwhackers at 4:30 PM

Labels: Trump meets with DOJ/FBI officials to discuss his demand to investigate the Russia investigation