We're still a bit bleary- eyed from watching the returns overnight, but here are some quick takeaways at the moment.

-- Current projections have the Democrats winning 230 seats, taking over the House for the first time in eight years;

-- As expected, Republicans kept control of the Senate in a year where most of the battles were in deep red states.  There are 3 seats too close to call (MT, AZ and FL) and one run-off seat (MS).

-- Democrats flipped a number of Governor seats (7 at last count).

Here are screenshots of the state of play at this time (7:30 a.m. EST). Click on map to enlarge (but for detailed results, go to the link): 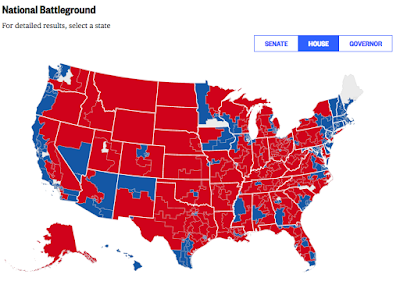 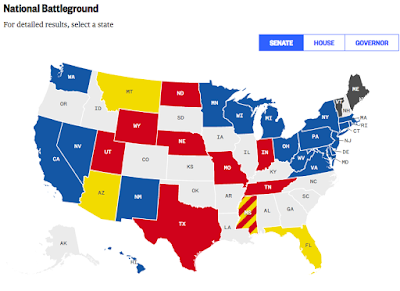 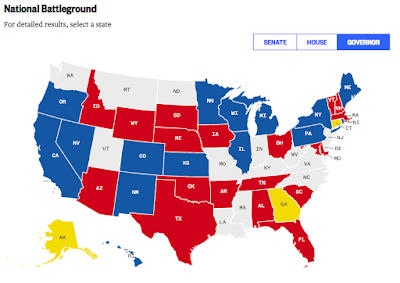 --  Over 100 women are projected to win seats in the House, the vast majority of them Democrats, setting an all- time high;

-- Sadly, Andrew Gillum lost his bid to be Governor of Florida, but Sen. Bill Nelson's re- election race is still too close to call;

-- The Georgia gubernatorial race is too close to call, with a large number of absentee and provisional ballots waiting to be counted.

-- Democrats flipped key Governor seats in Nevada, New Mexico, Illinois, Michigan, and Maine; the odious Scott Walker was booted in Wisconsin by Tony Evers and the king of voter suppression, Kris "KKK" Kobach, was suppressed in Kansas by Laura Kelly.

-- A small but delicious victory:  homophobe Kentucky Court Clerk Kim Davis was defeated in her re- election bid.

BONUS:  Some more perspective on a very good night overall --


We should be talking about the projected raw popular vote totals much more. In terms of raw votes, this is shaping up to be a massive wave. That it may not translate into an enormous margin in a wave of seats is an indictment of how we draw districts more than anything. pic.twitter.com/D0j96RbjCs
— Brian Klaas (@brianklaas) November 7, 2018


BONUS II:  If Dem Kyrsten Sinema loses the Senate race in Arizona, you can thank the useful idiots who voted for the Green Party candidate, who's pulling down about 2% of the vote. Oh, that's the same Green Party candidate who dropped out of the race last week and threw her support to Sinema.

They are being held at bay a little bit. The nation is red all you gotta do is look at the map. The whole world remains in grave danger from these people and of course Trumper is threatening.

Thanks for your passion!

I think that many Dems had pinned everything on the midterms, but after the smoke clears, we have a mixed bag of wins and losses. Ohio voters with no brains prevailed and we'll have dimwit grampa DeWine as governor and a few other stinkers, but Sherrod Brown won as Senator, so that's good.

It's a little too fresh for me to be overly optimistic. There were moments of brightness; more women were elected, higher voter involvement, flipping the House. But the Republicans are raging forward, Trump is braying about his power and influence over the campaign, and he's going to be the Republican candidate in two years.

And hey, the new House can start working on investigations and challenging some of the crooks in Trump's crime family, the Republicans.

So it goes. We can take a day or two to regroup, lick our wounds, and shake off the losses. But we have to get back to business now, organize and start strategizing for 2020. It will be here before we know it. And the Republicans are seeing their followers' approval and will continue to blast our democracy as much as they can.

I'm no Pollyanna, so I'm not going to try to paint last night as a huge win, but we can use the boost from the House as leverage to go forward and keep fighting. It could have been worse.

one fly and donnah - regardless of some disappointing losses, it was a really good night for Democrats, with the House flipping being the best note of all. At least 7 new Dem Govs in key states. Dems also now control both houses in the state legislatures of Maine, Colorado, NY, NH and Connecticut, and won the Minnesota House (making it the only divided legislature among the states). I look at it, perhaps too simply, as two big steps forward & one step back.