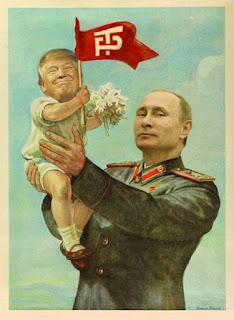 On last night's "The Last Word", Lawrence O'Donnell reported that a source close to Deutsche Bank told him that huge loans given to demagogue and Russian asset Donald "The Chosen One" Trump by Deutsche Bank were co-signed by Russian oligarchs close to Russian thug Vladimir Putin. The report has not been verified by NBC News, other news sources, or confirmed by Deutsche Bank. Trump had to go to foreign sources for credit, since his multiple bankruptcies caused American financial institutions to shun him.

Deutsche Bank has been at the center of money laundering activities involving Russian money, and has been sued by committees of the House of Representatives for Trump's tax documents used to demonstrate his assets to the bank for loan purposes. The bank suggested in Federal court that it is in possession of such tax documents.

Trump has been adamant that his tax returns remain private, despite his lie before the 2016 election that he would release them. There are good reasons that he wants them kept under seal, including likely tax, wire and bank fraud exposure. The possibility that Putin-tied Russian oligarchs have underwritten huge loans to him and his organization from Deutsche Bank would explain so much about his fealty and subordination to Putin and Russia.

BONUS:  The story has engendered a trending hashtag, #RussianCosigners.

UPDATE:  O'Donnell has now walked back the story, saying "it wasn't ready for broadcast."

While it would be fantastic to find Putin's friends fingerprints all over Trump's loans, I expect the information will be held for as long as possible, and if it can be proven absolutely, then I expect more drawn out litigation.

I have become extremely pessimistic about any ground being gained in the pursuit of Trump's illegal history. We have seen time and again that legal loopholes and foot-dragging will keep Trump in office. It's up to us, the voters, to get rid of him next November and then hopefully prosecute him at the state and federal levels. And even that will be drawn out. sigh.

donnah -- You're not wrong to be pessimistic. He's adept at shielding himself from the consequences of criminal behavior and scandal. His base will never abandon him, even if it's demonstrated without a doubt that he owes his financial survival to Russia and is steering U.S. policy accordingly.

Well, don't we suspect or know outright that Moscow Mitch is up to his flabby jowls in Russian dough? And how many other Republican businessmen and congresscritters, too?

It always seems like a big story, the big hammer that will finally bring Trump down. Remember the Mueller Report?

We know that even if Jerry Nadler gets everything he needs, like proof of Trump's collaboration with Putin's people, nothing will happen. As you say, his base will never let him down and his Republican buddies are complicit.