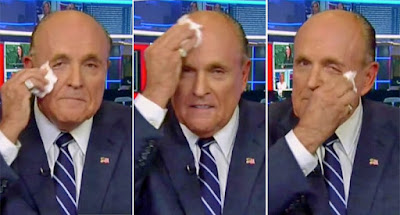 As the Trump-Ukrainian extortion scandal expands, it's obvious that Trump's TV lawyer and deranged conspiracy spinner Rudy "Ghouliani" Giuliani is flailing and failing in his efforts, going so far as to throw Secretary of State Mike Pompeo under the bus over the Ukraine scandal on Fux two days ago. He's long been at the center of the Trump extortion scandal with the Ukrainian government, having been the shadowy muck fabricator that was meeting with Ukrainian officials to extort bogus dirt on former VP Joe Biden and his son Hunter. Those actions, along with felonious con man Donald "Rump" Trump's mob-style "do us a favor" conversation with Ukrainian President Zelensky, are at the heart of the growing scandal. To make matters even more delicious, the corrupt and dishonest Giuliani can't keep his mouth shut and his hideous mug off of TV, as he continues to provide fodder and evidence for the impeachment investigation.

Party-before-country Republicans are increasingly angry about Giuliani, according to reports, with one Rethug lawmaker suggesting that Giuliani "take a vacation" or just disappear from TV so that they can spin their own lies to defend Trump. We fervently want Giuliani to keep digging his hole deeper by stepping up his TV appearances and further incriminate himself, Trump and the enablers around them. That would be patriotic of him.

(photo: He has the right to remain silent, but is incapable of doing so.)
Posted by Hackwhackers at 3:30 PM