Tracking Down The Insurrectionists: "This Ain't Over" 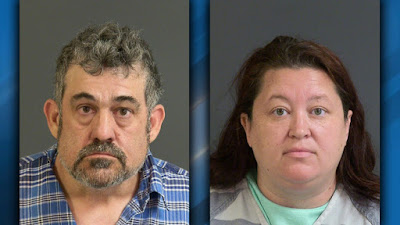 A South Carolina couple were arrested yesterday in Hanahan, SC by the FBI and charged for their role in the January 6 Trumpist insurrection. John Getsinger, Jr., and his wife Stacie have been charged with entering and remaining in a restricted building, disorderly and disruptive conduct in a restricted building,  and violent entry and disorderly conduct while parading, demonstrating, or picketing in a Capitol Building. They're out on $75,000 unsecured bonds each, promising to appear in DC court when summoned (better put ankle monitors on them).

According to the complaint, the Getsingers were identified by four separate tipsters and by video where they are seen to proclaim, "this is war, we're storming the Capitol." Also, Stacie Getsinger had posted on her Facebook page, "the election was rigged, and this ain't over." It's over for you and your hubby, Stacie. You shouldn't have believed your lying Dear Leader. Sad!

A reminder that you can do America a big favor by checking the photos and videos of the January 6 domestic terrorists on the FBI site, or the photos at the commendable Sedition Hunters site.

Posted by Hackwhackers at 7:00 PM