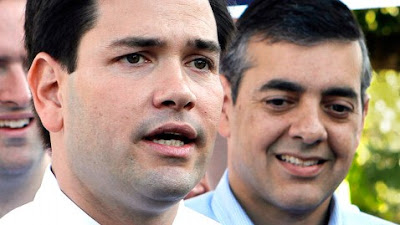 Seems like the fierce anti- socialists in the Republican/ Seditionist Party can have their objections overcome by the liberal application of truckloads of melons dollars:

A former Miami congressman who signed a $50 million consulting contract with Venezuela’s socialist government was arrested Monday on charges of money laundering and representing a foreign government without registering.

David Rivera, a Republican who has been marred by scandals stretching back to his days in Congress from 2011 to 2013, was arrested at Atlanta’s airport, according to the U.S. Attorney’s Office in Miami.

The eight-count indictment alleges Rivera at the start of the Trump administration was part of a conspiracy to lobby on behalf of Venezuela to lower tensions with the U.S., resolve a legal dispute with a U.S. oil company and end U.S. sanctions against the South American nation — all without registering as a foreign agent.

The indictment cites meetings in Washington, New York and Dallas that Rivera either attended or tried to set up for allies of President Nicolas Maduro with U.S. lawmakers and a top aide to former President Donald Trump. To hide the sensitive nature of his work, prosecutors allege Rivera referred to Maduro in chat messages as the “bus driver,” a congressman as “Sombrero” and millions of dollars as “melons.”

While none of the U.S. officials are named, evidence in a parallel lawsuit brought against Rivera show that while working for Venezuela the former congressman was in contact with Sen. Marco Rubio, a longtime friend who helped drive the Trump administration’s hardline policy against Maduro.  (our emphasis)

"A bus driver with melons and a sombrero walk into a cantina..."  There's a joke in there somewhere (beyond fellow gusano joke Li'l Marco Rubio).

The article goes on to name other objects of Rivera's eye, including far- right Rep. Pete Sessions (Coup-TX) and an unnamed White House counselor whose description sounds an awful lot like Kellyanne Conway.  Lawyer up!

Of course, the entire "presidency" of the Malignant Loser was one long, excruciating exercise in influence peddling and grift, so Rivera and his cronies were simply at one of many troughs being accessed by members of their rotted out party, though the added hypocrisy of these "anti-socialists" working behind the scenes to foster better relations with Maduro's government adds a bit of frisson to the whole affair.