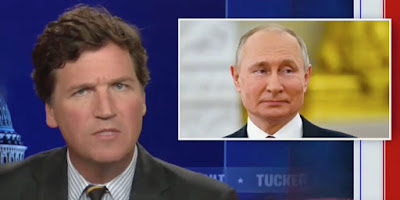 The Guardian has a lengthy and important story about the pro-Kremlin right in this country, and how they are taking war criminal and thug Vladimir Putin's talking points to an American audience. The first paragraphs of the story are disturbing:

"Ever since Russia launched its brutal war in Ukraine the Kremlin has banked on American conservative political and media allies to weaken US support for Ukraine and deployed disinformation operations to falsify the horrors of the war for both US and Russian audiences, say disinformation experts.

Some of the Kremlin’s most blatant falsehoods about the war aimed at undercutting US aid for Ukraine have been promoted by major figures on the American right, from Holocaust denier and white supremacist Nick Fuentes to ex-Trump adviser Steve Bannon and Fox News star Tucker Carlson, whose audience of millions is deemed especially helpful to Russian objectives.

On a more political track, House Republican Freedom Caucus members such as Paul Gosar, Marjorie Taylor Greene and Scott Perry – who in May voted with 54 other Republican members against a $40bn aid package for Ukraine, and have raised other concerns about the war – have proved useful, though perhaps unwitting, Kremlin allies at times."  (our emphasis)

Tucker "Mothertucker" Carlson in particular has been an avid disseminator of Putin's messaging on Ukraine. Carlson sees Putin's interference in the 2016 and 2020 elections on the Malignant Loser's behalf, as well as his Christofascist policies, as the mark of an ally. Russian state television has made Carlson one of the most popular media personalities (also see here and here), as they play clips of his attacks on Ukraine and our policies.

Led by unhinged right-winger Marjorie Taylor "Traitor" Greene (Insurrection-GA), the House Republican Freedom Fascist Caucus is rife with fifth columnists who want to undermine our support of a democratic Ukraine, in favor of Russia's brutal and illegal invasion. They've ignored (or worse, adopted) Putin's numerous statements that he wants to destroy the U.S.'s influence in the world, and his April, 2005, annual message in which he declared that the fall of the Soviet Union to be the greatest political catastrophe of the 20th century. Putin's on a mission to recreate the geographic footprint of the Soviet Union, but as a anti-American fascist / imperialist entity, one that clearly has the support of some of the U.S.'s most prominent right-wingers.