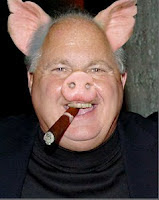 "For over 20 years, I have illustrated the absurd with absurdity, three hours a day, five days a week. In this instance, I chose the wrong words in my analogy of the situation. I did not mean a personal attack on Ms. Fluke... [eliminating the rationalization here]

"My choice of words was not the best, and in the attempt to be humorous [to be humorous? liar!], I created a national stir. I sincerely apologize to Ms. Fluke for the insulting word choices."

Let's see. He spent 3 days trashing Ms. Fluke, then says all his hateful language was just Rush trying to be his hilarious self. Riiiight! Regular Limpballs listeners needn't worry, though. Limpballs will be back offending common decency again at the soonest opportunity. But we certainly hope Ms. Fluke takes Pig Man to court for slander and wins. As someone who has made an enormous contribution to driving the level of political speech into the gutter over the past 30 years, Pig Man deserves whatever justice can be meted out.