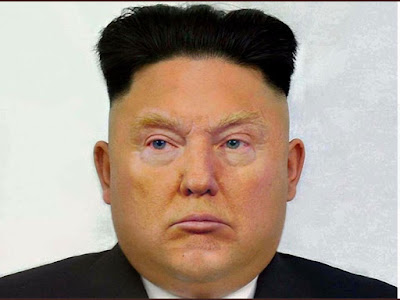 The hastily arranged meeting between North Korean dictator Kim Jong-Un and sociopathic demagogue Donald "Rump" Trump has been cancelled by Rump in an odd letter to Kim. The letter, which pouts about recent harsh language aimed at Rump's rump kisser Mike "Dense" Pence, oddly lavishes praise on Kim for releasing the three American hostages and resurrects the taunt that Rump has a bigger button nuclear arsenal than North Korea.

Given the mix of compliments and threats, it's hard to know whether the incompetent Rump is trying to give Kim an opening or to give himself an out, after embarrassing himself with his lack of preparation and over-eagerness to negotiate. Either way, this is what passes for foreign policy under Rump.

Guess the coin they minted will be a hot collector's item (proceeds payable to Rump?).

BONUS: Raw Story has the round up of snark, including this suggested replacement for the coin: 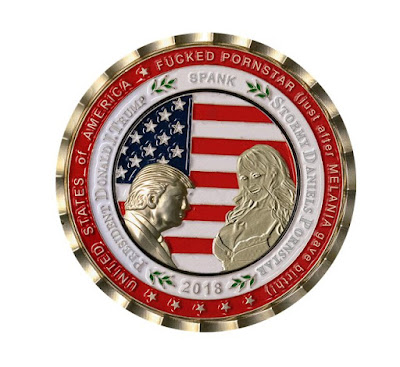 BONUS II: Our South Korean allies were caught off guard by Rump's sudden action, calling it "very regretful and disconcerting." 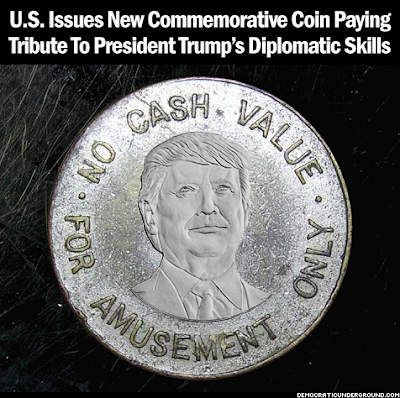 (Attribution: democraticundergound.com)
Posted by Hackwhackers at 10:00 AM

Do you read "Ask the Korean" blog or twitter? You need to read it if you don't already.