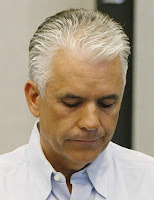 Sources are reporting today that beleaguered Rethug Sen. John "Don Juan" Ensign (Adulterer-NV) will not seek reelection in 2012. The ethically challenged Ensign is under investigation by the Senate Ethics Committee over questions of payoffs-for-silence during the implosion of his affair with the wife of a chief aide. Ensign may have had a tough reelection fight, although the example of Rethug Sen. Diaper Dave Vitter (Pampers-LA) winning reelection in Louisiana in 2010 might make the argument to the contrary, given the demonstrably low standards of the Rethug base.