Paying The Preacher To Pray Away Crime 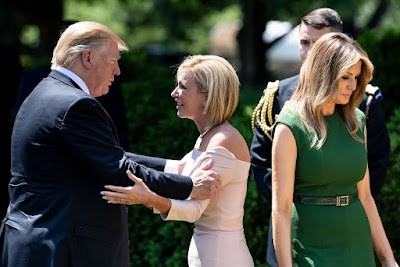 Demagogue and someone who's broken the ten commandments myriad times Donald "Two Corinthians" Trump has a group of avaricious hustlers around him as his "spiritual advisors." One of his most prominent Bible-bangers is flashy, painted-up "prosperity gospel" grifter Paula White. We and others have covered White before, her lavish lifestyle, which she's sold to her flock as the lawd's recognition of her goodness, troubles with ethics, and her golden calf-like worship of Trump.

Now, White is claiming that because her flock prayed after 9 -11, crime decreased as a result, as Right Wing Watch reports:


“Do you know that they said when we prayed during 9/11, that crime went down more than anything because it took tragedy for the righteous to pray?” White said. “It is statistically proven because of the power of prayer that crime across this nation and across the world drastically went down.” (our emphasis)

"[T]hey said..." must be the same "they" as the voices that her golden calf hears when he wants to lie about something. And, of course, it's "statistically proven" when you use the same "statistics" that "they" are giving you.

We "pray" that Ms. White's fleeced flock one day wakes up to her con, but we're not optimistic.

(photo: Grab her quick, while "Melanie's" not looking. B. Smialowski, AFP/Getty Images)